Is it Safe to Exercise on my Back during Pregnancy?

Welcome to our blog series Bad Prenatal Fitness Advice in which we look at the most common recommendations given to pregnant women about exercise and call out the good, the bad and the seriously wrong. This series is about learning the history of these recommendations, chasing down the research and boiling it down to what you really need to know about safe, healthy exercise during your pregnancy. 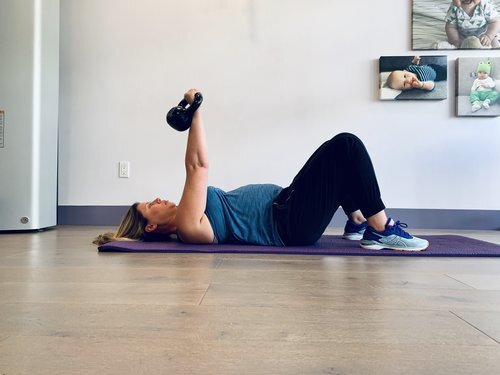 30 weeks pregnant and exercising on her back

Can I Safely Exercise Flat on my Back during Pregnancy?

The internet is the Wild West of information about your pregnancy.  It’s lawless, unchecked, riddled with petty brawls and bad information blows through town like tumbleweed. If you’ve ever read a list of prenatal exercise recommendations, you’ve likely seen the advice, “don’t do any exercises on your back after the first trimester.” This is well-intentioned, but ultimately incorrect. Let’s break it down.

The controversy about supine exercise lies in a condition called Supine Hypotensive Syndrome during which the pregnant uterus compresses the inferior vena cava and restricts blood flow returning to the heart of the mother. This can cause a drop in blood pressure which results in dizziness, nausea and rapid heartbeat. The condition is immediately resolved by a change of position. It does not cut off blood to the uterus or fetus. ⁣

How Common is it?

Research shows this condition occurs in only about 11.2% of third trimester pregnancies. It is nearly unheard of before 28 weeks. Many of the cases measured had a blood pressure reduction so small that neither symptoms nor adverse effects occurred. ⁣In fact, there have only been 3 cases reported EVER of women having the condition without experiencing the symptoms that act as fire alarms and prompt you to roll or adjust. So if you lie on your back and don’t feel lightheaded, you probably do not have to worry about this.

What the Doctors Recommend

In 2015 American College of Obstetricians and Gynecologists (ACOG)  removed the recommendation to never perform exercises supine and replaced it with “avoid this position for long periods of time.” How long is that? They don’t specify. But a 2014 comprehensive review of literature on this condition says that symptoms will usually occur within 3 minutes and come with an overwhelming instinct to roll or sit up.⁣

There is a wealth of research on the supine position and pregnancy  which makes sense because c-sections are performed supine (lying on the back) and occasionally pregnant women require other surgeries that are performed on their backs. There is also growing concern that back sleeping is linked to adverse fetal outcomes. So doctors need to know what happens when pregnant women are immobilized on their backs for long stretches of time.

What about Sleeping on the Back during Pregnancy?

It’s important to note that sleeping or being under anesthesia or otherwise immobile on the back is NOT the same as short bouts of awake, alert activity in the supine position.  One study shows that uterine blood flow is decreased in the supine position both at rest and during exercise. However, at rest, the decrease is a whopping twice that of exercise.  The decrease experienced during supine exercise is well within a range that is easily tolerated by both mom and baby.

Say it with us, “SUPINE IS FINE!” If you feel comfortable on your back, you’re most likely okay to perform supine exercises. And if you have a hypotensive response, your body will let you know before it can harm you or baby. As with any pregnancy complications, know the symptoms to look out for and talk to your doctor if you have any specific concerns.

Previous Post:
« Super Sweaty Low-ish Impact Postpartum WorkoutNext Post:
Why Do I Still Look Pregnant After Having a Baby? »